It dawned on me shortly after my wife and I welcomed our second child that I needed to revive my Turtle Biscuit series. After all, how would it look to the girls a decade from now when they both can read and they realize that I documented my experiences with one but not the other.

And the more I think about it, just as I was eager to share tales of the lazy days I spent with Turtle Biscuit while on leave in 2011, the forthcoming trials and tribulations of being a commuter parent of an infant are also important, and worthy of reflection.

With that being said, I introduce everyone to Baby Biscuit, Little sister of Turtle Biscuit, Singing Biscuit and College Biscuit (formerly Teen Biscuit).

Yesterday afternoon we took Turtle Biscuit to a reading for Bill Campbell’s new book Koontown. Afterward when the DJ started playing Digable Planet’s “Cool Like Dat,” my little Turtle hopped onto the center of the floor and began dancing. Looking at the joy in her eye as she boogied her little heart out I couldn’t help but smile and to think to myself this little girl is gonna be alright….

Speaking of things that resonated, when I saw this poster during a recent trip to Target I 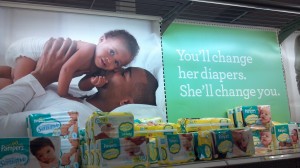 was instantly struck. It is practically pitch perfect. Great copy-line and the photo was neatly captured the bond between a parent/father and child. I couldn’t help but take a picture so that I could keep it in the file to share with Turtle Biscuit one day.

I have to realize that I am cheating my readers when I disappear during critical junctures.  Since I last wrote I started a new job at a school in DC.  The teaching from teaching at a college to teaching at a high school is a big enough transition in its own right, but when coupled with also transitioning from being a stay at home parent, the shift is staggering.

I miss Turtle Biscuit to say the least.  Since I’ve started work she’s started crawling and sitting up on her own.  A month ago I would’ve been the first person to see these transitions.  Now, I’m often the last.  It feels odd to get a summary of her day and her progress toward a new milestone instead of experiencing these things first hand.

There’s so much to say about this shift, and I intended on writing much of it down. However, in spite of my best intentions, I never completed the final installments in the Home Alone series nor did I put pen to paper about the feelings I had when I left Turtle Biscuit in the mornings to go to work.

All that I can say is that I will try to do better, but as I am learning in a whole new way these days, you can’t turn back time.

“If you a real fine Dad, you better back that thang up.”

Ok, I know you’re wondering where this is going and trust me, I have a good reason for invoking the godfather of New Orleans rap. I lost my phone two weeks.  We believe it was stolen off the deck by some groundhogs (I kid you not).  Those who know me know that this wasn’t the first time, nor is it likely the last that a phone of mine met an untimely death.  Unlike previous phones however, this one was special.

Wait, let me rephrase that, the information stored on this phone was special.  This phone had a camcorder that I had used to record Singing Biscuit’s first film production “King Chuck’s Last Stand”, and a few recordings of Turtle Biscuit doing everything from rolling over to engaging in a fierce battle with some leaves on the deck of our old apartment.

Unlike the photos and contacts which I had been doing a good job of syncing with my computer, there was no backup for these videos.  So not only did our little backyard critter take my ability to make calls, but s/he also took away an archive of some priceless moments.

Thus after finally conceding that the phone was lost and I would have to indeed get a new one, I knew that a new mantra was also needed to make sure that I learned the lesson of this setback.  Hence the advent of my Juvenile remix…
So all you Dads out there, as you’re snapping away with the camera or recording those digital shorts, do remember—

If you a real fine Dad, you better back that thang up….

After checking out the blog one of Snuggle Biscuit’s friends sent along the following message:

a great living open letter from a father to his daughter. She will get so much joy out of these words one day.

I never thought of this series of posts as an open letter until I read those comments.  Ironically, I thought more about my children reading my writing prior to having children than I do now that I am a parent.  In fact, I am almost afraid of the thought of my children reading my writing one day.  Not that I’ve written anything scandalous, or even plan to, but it seems that the more I write, the less self-aware I become as a writer.  Or rather, the more I write, the less I know who I am as a writer and it scares me to think what my children will uncover.  This fear is not unlike the one I have about other family members reading my work.

Time will tell how I handle this realization, and this fear.

But when the day comes for Turtle Biscuit to read these notes, I want to be sure she doesn’t have to go one post further without reading these five words: I love you my dear….

Every year I promise to not procrastinate so that I am on top of everything and have accomplished everything that I set out to do by the time the new school year rolls around.  Instead of waiting until August to start feeling overwhelmed or as if I have fallen behind, it looks like I will start off the summer feeling this way.  This makes sense given that it was 90 degrees in my neck of the woods earlier this week. If summer heatwaves can arrive in late May, I guess I can start feeling as if I am behind the eight ball during the first week of June.

The irony though is that I am just now starting to get the hang of this primary care thing.  Turtle Biscuit and I have been on a roll the past two weeks.  Twice this week I accomplished something I had fantasized about in February/March prepping dinner while Turtle Biscuit took her afternoon nap.  While she slept, I diced vegetables, made the salad, got crackin’ on the mac ‘n cheese and marinated the evening’s protein.

February I was too sleep deprived to think straight enough to accomplish this and in March Snuggle Biscuit had just returned to work and I was realizing that I am wetter behind the ears when it comes to this parenting thing than I had previously presumed.

I don’t recall April or May…

But June has looked majestic thus far, that is until I realized that oh doodlesuaddlebugs “It’s almost September and I still have a million and one things to wrap up!!!”

Normally, I’d start prepping my lawsuit against time, but I don’t even have time to do that these days…

To say the least it’s gonna be a hot summer—not quite long—not quite fast—but definitely a hot one.

As a kid growing up in New York City I was much better at inflicting damage in homes than repairing them.  My parents have lived in the same apartment building for almost 40 years and the same super has managed the building for most of those 40-years.  Therefore, like most NYC renters, whenever something popped up in the building, we called our super.  That our super had grown into such a close family friend that he was practically a relative, made it almost as if my mother was asking my father or my uncle to fix something whenever she called on Fernando.  And since I was more interested in memorizing the stats for the 85-86 Yankees or Mets than mastering any home repair skills, it quickly became apparent, that like my dad, I was pretty useless for anything beyond changing a light bulb. Over time I learned how to do more than change a light bulb, but not more–I mean let’s not get it twisted–no one’s ever confused me with Bob Villa.

When I bought my apartment in NY a few years back one of the things that I looked forward to was attending to some home repairs.  A trip to Lowe’s to buy a washer/dryer quickly stripped me of these aspirations.  As the salesman began running through various warranty options, I looked at the price tag for the machines once again and realized that this machine cost almost ten times as I spend on laundry a year, plus I’d be burdened with power and maintenance costs.  Saying goodbye to that washer/dryer I vowed to keep it simple, or as a friend would later tell me “always remember fewer moving parts means fewer chances for things to break”.  Thus my biggest handyman breakthrough as a first time home owner was essentially, I rather not be all that handy.

Three years later, now residing in the suburbs and having to factor in that my decisions don’t just impact me, I am having to make a critical shift and upping my home repair skills.  One way of putting this transition is that  I’ve morphed into my family’s Fernando.  In less than three weeks of our new house, I’ve done more repair work than I’ve done in the previous 30 years of apartment living.  Among other things,  I’ve installed new power cords on a washing machine and dryer, unclogged drains, and fixed some delinquent kitchen cabinet hooks.

These were just the starter tasks to get my bearings around the house and local hardware stores.  There about 3-dozen other items awaiting my attention on the “honey-do” list.  Completing each job has brought a sense of reward, and it’s delightful to have a tangible accomplishment to turn to at the end of a day.  Whereas before, I’d be delighted by having written a page, read a book, or revised a syllabus, now I’m overjoyed after fixing Turtle Biscuit’s swing or a successful trip to home depot.

Speaking of Turtle Biscuit, she’s been a great companion as Dad has embarked on these home repair adventures.  I am looking forward to enlisting her help in future projects as she gets older.  And whereas before I was always quick to declare that my child will speak multiple languages, I am now similar elated by the fact that my daughter will know how to operate a drill (and then some).